The Museum of Nickolas Roerich in the old Altai settlement of Verkhniy Uymon.

In 1926 the Central-Asian expedition, arranged by Roerich, arrived at the Altai. By that time the expedition had covered a great distance from India via the Himalayas, Tibet and China to Russia. The artist’s wife and elder son also took part in that expedition.

Roerich as a scientist was interested in the Altai as the centre of Eurasia, as he said, ‘an equal distance from the four oceans’. Here, in the centre of the Altai, in the most northern point of the Central-Asian mountain range, there is the highest peak of Siberia and the Far East — Belukha. Civilization didn’t change the Altai much and it became a peculiar museum in the open air. Here Roerich studied antiquities, traditions, customs and the history of the great migration of nations.

‘I began to paint the picture ‘The Unspilled Chalice’, Nicholas Roerich writes in his diary, ‘the bluest, the clearest mountains. (...) And he carries his vessel from the mountain.’

In the foreground of the picture one can see a person carrying a symbolic vessel. Roerich wrote, ‘If a person knows that he must bring something for the sake of the Hig­hest Good, he will exert all his wit, all his capacity and tolerance not to spill his chalice in vain. It’s not for himself that he carries it. (...) Ser­ving Mankind is not a self-important idiom. On the contrary, it’s a lofty and hard demand which everyone should lay down before himself as an earthy aim.’

When Nicholas Roerich was in Altai he observed Vakhramey Atamanov, seeing some features of St. Pantaleon the Healer in him. In his itinerary the artist wrote such warm and sincere words, ‘He isn’t surprised at anything, as was precepted by the wise; he knows minerals, he knows marals, he knows bees, and most importantly he knows herbs and flowers. (...)

Not only does he know where and how these flowers grow and where roots hid themselves, but he also loves and admires them. And having picked a pile of multiflorous herbs he brightens up in his face to the silver beard itself and he caresses them and tenderly tells us about their good’.

The expedition became an important event for the villagers. The old residents still keep in memory those wonderful people who had visited this place and studied
Altai culture, history and nature. One can say that Roerich revealed the Altai to the whole world. He predicted a great future to the Altai.

‘The Katun is affable. The blue mountains are clear. The Belukha Mountain is white. The flowers are bright and the green herbs and ciders are soothing. Who said that Altai is severe and for­bidding? Whose heart fea­red austere beauty and might?’ 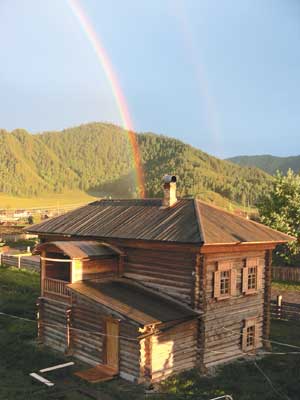 On the completion of the Central-Asian Expedition the Roerichs planned to come back to Altai and settle in Verkhniy Uymon. ‘Golden is this locality, in five years I’ll be here,’ said Nicholas Roerich to Uymon dwellers. But his fate decid­ed differently, and Roerich returned to Altai only at the century’s turn.